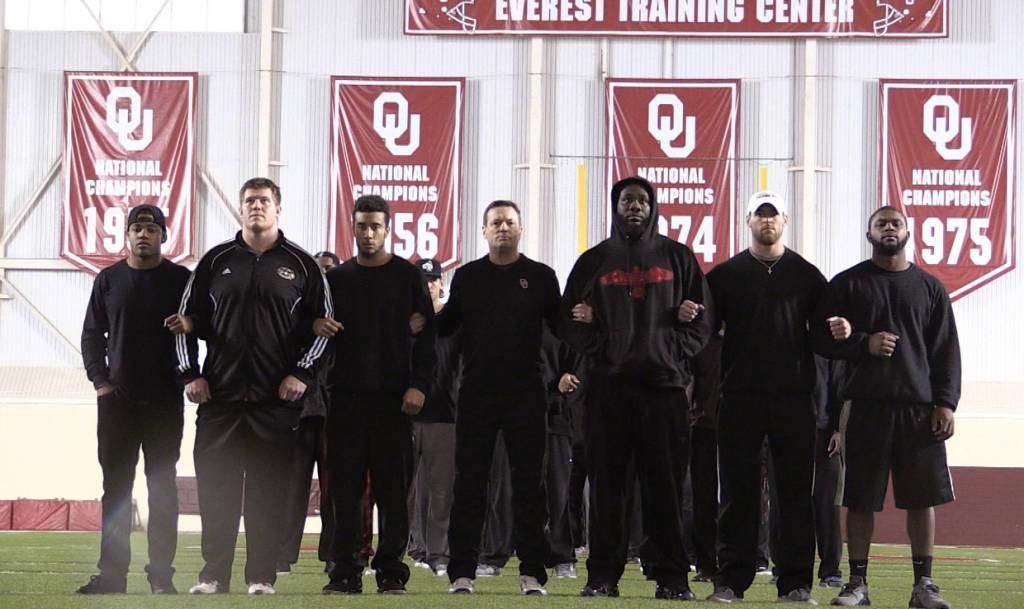 Oklahoma football coach Bob Stoops (center) stands with members of the football team in silent protest Monday in reaction to a racist video that came from a fraternity on the OU campus. 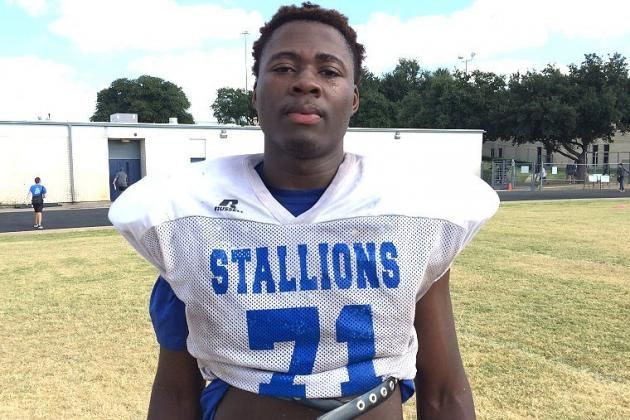 Jean DeLance, a 4-star football recruit, says he has decommitted from Oklahoma in response to the racist video from an OU fraternity.

Oklahoma football coach Bob Stoops (center) stands with members of the football team in silent protest Monday in reaction to a racist video that came from a fraternity on the OU campus.

Jean DeLance, a 4-star football recruit, says he has decommitted from Oklahoma in response to the racist video from an OU fraternity.

On a cold rainy afternoon, Oklahoma’s football players typically make the short walk across Jenkins Avenue from the Switzer Center at a brisk pace.

However, on Monday they, along with coaches and administrators, walked in rows of five, arm-and-arm, dressed in black.

Practice was called off when campus protests, prompted by a viral video of fraternity Sigma Alpha Epsilon's racist chants, took precedence. Players stood silently for five minutes inside the OU indoor practice facility, then gathered at midfield, said the Lord’s Prayer and departed.

Less than two miles down the road, OU’s basketball team practiced at Lloyd Noble Center. It faces Oklahoma State on Thursday in the Big 12 tournament. The video still weighed heavily on their minds. It was a mixture of anger and anguish but, unfortunately, not amazement.

“I don’t like how that’s on our campus,” point guard Jordan Woodard said of the video. “At the same time, I understand that’s still part of our society. I am not surprised by it.”

Many athletes attended the organized protests that began Sunday night on the North Oval and Monday morning’s on the South Oval.

They were joined by basketball coach Lon Kruger and football coach Bob Stoops. Many assistant coaches joined the players.

“What happened is disgraceful and embarrassing and totally uncalled for. I think that’s the feeling of everyone, not just the athletes, but everyone anywhere,” Kruger said. “If you have a family member, you don’t want anyone subjected to that. You don’t want your children to see it. It’s not just an athletic thing; it’s across the board. Guys, I think, responded appropriately with great distaste for it.”

For OU’s basketball team, Monday should’ve been a day of congratulations. Guard Buddy Hield was named the Associated Press Big 12 player of the year. TaShawn Thomas was named the league’s top newcomer. Two days earlier, it wrapped up the regular season with a thrilling win over Kansas.

No one wanted to talk about those things.

“After you win a big game, everybody is usually telling you ‘good game,’ but everyone is talking about the protests right now. It was something that blew over,” Thomas said.

How it affects the Sooners remains to be seen.

The athletes know they are the most visible section of the student body. They wear the brand on the field and the court. OU football and men’s basketball teams generated more than $80 million in revenue for the school last year.

And they are predominantly African Americans, who have witnessed a video where they are being insulted and dehumanized by a group of their peers.

The lifeblood of OU’s athletic programs is recruiting. Success comes down to attracting top-level players. All seek an environment where they will be, at a minimum, respected.

Whether or not the videos specifically cost OU a commitment from Mesquite (Texas) North High School offensive tackle Jean Delance is not assured. Nonetheless, Delance announced via Twitter Monday morning he is no longer committed to the Sooners.

“Nothing to do with the staff or team, I’ll be re-opening my recruitment due to personal reasons,” Delance wrote.

Delance committed to OU in November. The four-star recruit started visiting more schools over the winter, but was in Norman for the Sooners’ junior day this past weekend.

Forward Ryan Spangler is the lone non-African-American starter on OU’s basketball team. He’s also a native Oklahoman from nearby Bridge Creek. He knows the school’s and the state’s image will likely suffer.

“A Southern state, they already depicted us like that, but obviously, now, it’s on a national level,” he said. “Hopefully, people don’t think of Oklahoma that way.”

The school’s response to the video has been swift. Athletes appreciate that. The fraternity is gone. OU President David Boren said Monday he’s looking into the harshest punishments he can legally justify for the offenders.

Only time will tell if it’s enough to overcome what emerged Sunday night, but it’s going to take time. The video is hard to forget.

“If I would’ve seen that, I would’ve had to think about coming to this campus,” Woodard said.

NORMAN, Okla. – Sigma Alpha Epsilon fraternity has shut down its chapter at the University o…

Two students identified as having a leading role in a racist chant by members of the Sigma Alpha Epsilon at the University of Oklahoma were expelled Tuesday in connection with the matter, the school’s president said.