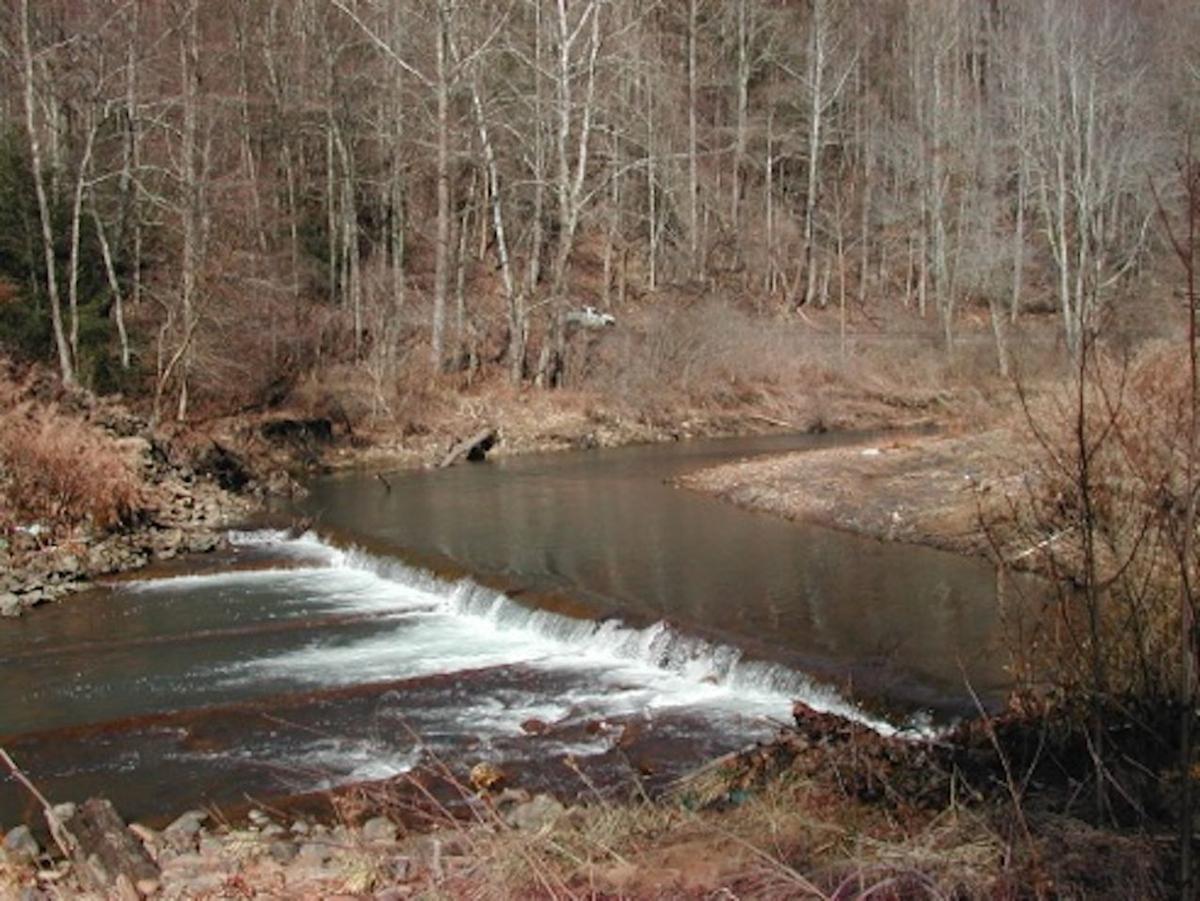 he remains of this splash dam, near Amigo, is one of the few remaining anywhere, according to historian David “Bugs” Stover. It was in use from 1893 to 1912 by the Whittenburgh Lumber Company, according to historian Jack Feller (1922-2013). Without a railroad or trucks, logs were “splashed” down the Guyandotte River to the Ohio River, at Huntington. 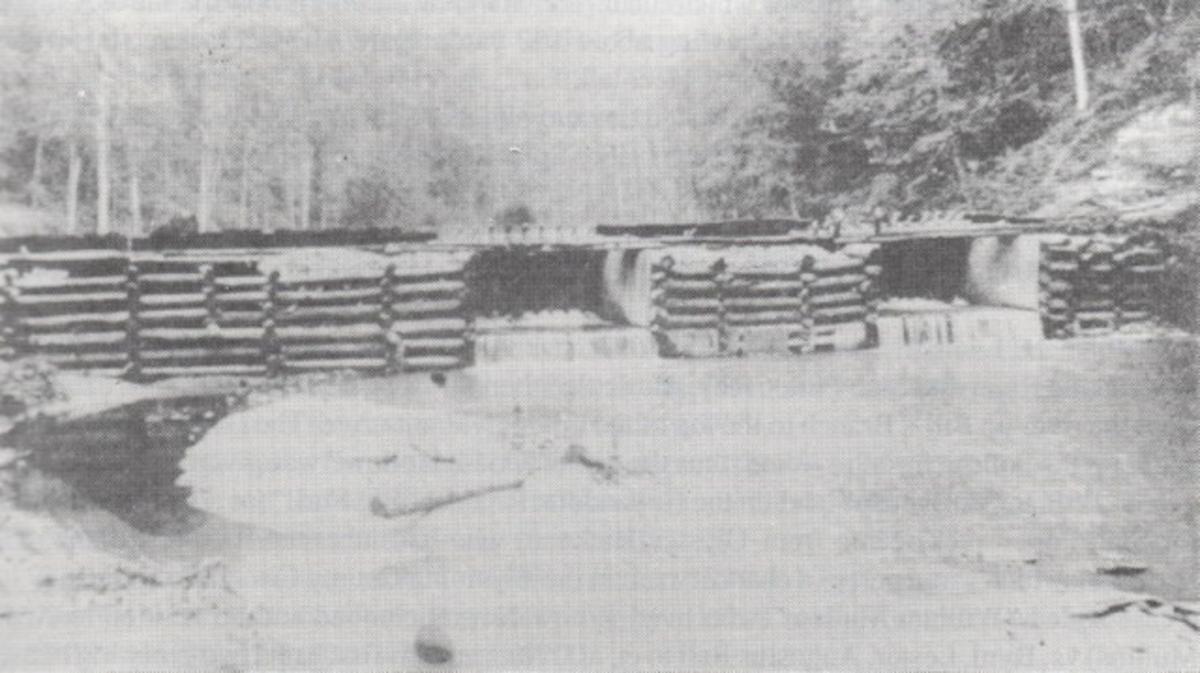 This splash dam, about seven miles from Mullens, near Amigo, was in use from 1893 to 1912 by the Whittenburgh Lumber Company, according to historian Jack Feller (1922-2013). This photo is reprinted, with permission, from Feller’s book, “Memories and Photos of ‘Mullins,’ West Virginia, Volume 1.”

he remains of this splash dam, near Amigo, is one of the few remaining anywhere, according to historian David “Bugs” Stover. It was in use from 1893 to 1912 by the Whittenburgh Lumber Company, according to historian Jack Feller (1922-2013). Without a railroad or trucks, logs were “splashed” down the Guyandotte River to the Ohio River, at Huntington.

This splash dam, about seven miles from Mullens, near Amigo, was in use from 1893 to 1912 by the Whittenburgh Lumber Company, according to historian Jack Feller (1922-2013). This photo is reprinted, with permission, from Feller’s book, “Memories and Photos of ‘Mullins,’ West Virginia, Volume 1.”

Wyoming County is home to the remains of one of the few remaining splash dams used, in the 1880s and into the early 1900s, to move logs down the Guyandotte River to market via the Ohio River.

Timbering was one of the county’s earliest industries, according to historians.

“After the Civil War, vast amounts of timber were needed by the nation, but there was no way to get it out of the mountains,” said David “Bugs” Stover, well known author, historian and storyteller. “An era of splash-damming started.”

However, prior to the railroad and trucking, the only way to transport logs was by way of the river. To move the logs downstream, the water level had to be high.

A splash dam, or a temporary wooden dam, was used to raise the water level in streams to float logs downstream to sawmills. The dam spanned the width of the river, creating an upstream reservoir in which the water and logs were stored until the spillway was open and the logs were “splashed” downstream.

By impounding water and allowing it to be released on the log drive’s schedule, these dams allowed many more logs to be brought to market than the natural flow of the creek allowed, according to historians.

Water releases from multiple splash dams on tributaries were often combined to maximize the number of logs floated throughout a given watershed.

“In the early days of timbering, logs were either floated free all the way to Guyandotte or made into rafts near mouth of Huff Creek at a narrow and rough section of the river, called ‘The Roughs of Guyan’ to prevent loss of timber by scattering and lodging in jams and drifts,” Bowman wrote in her “Reference Book of Wyoming County History,” published in 1965.

As many as 200 logs could be held together with bolts and chains, creating a raft, and floated down river, according to Bowman.

The logs were branded with the owner’s personal brand, just like cattle, in an effort to re-claim those that may have become separated along the river.

“Natural high tides (usually in winter or spring) were increased by a system of splash dams built in the larger creeks to create the required large and swift flows to carry logs downstream,” according to historian Rev. G.P. Goode (1868-1959). “The dams were built at strategic points along the length of creeks within reach of areas being timbered usually in a series of three or four depending upon the length of the stream.

“As each ‘splashed’ creek added its volume of logs and water to the river, its volume increased accordingly, picking up more logs at various points down its length...”

The “splashing,” or releasing the impounded water and logs, also created much enthusiasm in the communities along the rivers or creeks. The public was notified and, often times, schools were dismissed so people could watch, according to Bowman.

“Dams were built along the Guyandotte and its tributaries, and this water would be released on a schedule, allowing that year’s entire cut to be rafted down to the Ohio River and sold,” Stover emphasized. “Millions of logs. Much money.

“This 30- to 40-year period was a wild time of great adventure, hard work, death and profit,” Stover said.

“The poet, Thomas Dunn English, wrote an epic poem about rafting logs on the mighty Guyan. He was a friend, enemy and competitor of Edgar Alan Poe.

“Some of the financial giants involved were the companies Cole and Crane as well as Buskirk and Wittenburg. They made millions,” Stover emphasized.

“In 1906, the death knell of this period was sounded in the brand new town of Mullens,” Stover said. “Garland and Litz and others were putting in band mills, and the Deep Water Railroad and others were coming to service the arrival of King Coal.

“In late March, two industrial giants met head-on and the fate of Wyoming County was sealed for the next century,” Stover said. “Cole and Crane had been cutting thousands of logs, and, with a big splash dam ready just across the Raleigh-Wyoming County line and the Guyandotte up from heavy rain, it was time to splash the logs!

“Deepwater Railroad had just completed a temporary bridge across the Guyan at Mullens and was well along building a permanent steel bridge,” Stover said.

“Cole and Crane splashed the dam; millions of gallons of water and thousands of logs were bearing down on Mullens just as a work crew began on the new railroad bridge!

“Workers scrambled to safety, but the temporary bridge was washed away and the steel structure was turned over into the flood.

“In May of that year, Deepwater (Railroad) sought an injunction, stopping Cole and Crane from flooding the Guyandotte.

“Cole and Crane fought back; splashing is how they had always done it,” Stover said.